Based on a better understanding of synonymous codon choices, we would like to combine the most viable synonymous codon substitutions together and test their feasibility to simultaneously recode all 11 target codons. When implemented in the whole genome, this combined recoding will remove 11 triplet codons from the decoding box, and free-up 17% (11 out of 64) of all triplet decoding capacity for reassignment to encode unnatural amino acids.
A synthetic genome with all 11 target codons reassigned is indeed ambitious and potentially risky, and can only proceed following the identification of viable recoding schemes for all target codons. One possible compromise with significantly reduced technological risk is to solely remove and reassign a subset of the 11 proposed target codons (Figure 3). This also allows us to individually test the feasibility of removing and reassigning an isolated subset genome-wide before combining them with the remaining target codons. 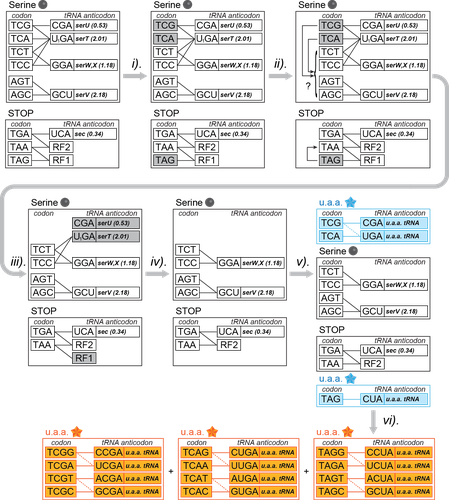