The design and synthesis of genomes provide a powerful approach for understanding and engineering biology.  Genome synthesis can elucidate synonymous codon function, facilitate genetically encoded unnatural polymer synthesis, and accelerate metabolic engineering. Methods that i) work with industry applicable bacteria and higher organisms, ii) replace the genome in defined sections, iii) provide feedback on precisely where a given design fails and on how to repair it, and iv) that can be rapidly iterated for whole genome replacement, would accelerate our ability to understand and manipulate the information encoded in genomes. However, in E. coli – the workhorse of synthetic biology – progress on replacing large sections of the genome has been slower than in naturally recombinogenic organisms. Sequence-specific recombinases may be introduced into E. coli to direct recombination at defined target sequences, that must be introduced into the genome in advance, and these approaches cannot be iterated. Lambda red-mediated homologous recombination is commonly limited to deletion or inserting/replacing only 2-3 kb of genomic DNA with limited efficiency and locus specificity (Figure 1).

To address these challenges, we have designed and developed the Replicon Excision Enhanced Recombination (REXER) system, which enables the efficient, programmable, iterative, one-step introduction of long synthetic DNA fragment into the genome, as insertions or replacements (Figure 1). Because of the iterative nature of REXER, the product from the first round can serve as a direct template for the next round, leading to consolidation of a progressively longer synthetic segment on the genome. Iteration of REXER steps paves the foundation for the Genome Stepwise Interchange Synthesis (GENESIS) strategy, which synthesizes a new genome from a wildtype template through multiple consecutive REXER steps (Figure 1e). Given the length independence of REXER and the ability of E. coli to readily accept 300-kb bacterial artificial chromosomes (BACs), the entire 4.6-mb E. coli genome can be replaced with synthetic DNA in around 15 steps. Each step takes only a few days to implement and convergent syntheses may further accelerate complete genome synthesis.

Based on the extremely high efficiency of REXER and the deep sequencing capacity offered by Next Generation Sequencing, we have further developed and adapted our REXER method to locate and correct deleterious design flaws on synthetic DNA with single nucleotide accuracy. Such abilities to very quickly test, debug, validate and improve synthetic DNA design is unique to our methods, and crucial in deciphering the hidden message of life during our expedition to create a synthetic life form powered by a synthetic genome. 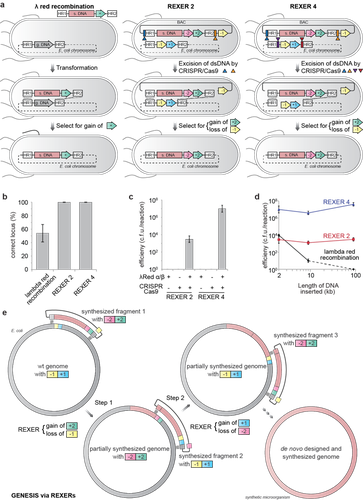 c.  REXER 2 and REXER 4 are dependent on the CRISPR/Cas9 system and recombination machinery. Controls omit either spacer RNA or lambda red beta.

e. The product of the first round of REXER serves as a direct template for the second round of REXER. Iterative genomic replacement by REXER will enable genome replacement in a series of steps following the Genome Stepwise Interchange Synthesis (GENESIS) strategy. Pink segment: synthetic DNA; grey segment: genomic DNA; +1: KanR; -1: rpsL, +2: CmR, -2: sacB.